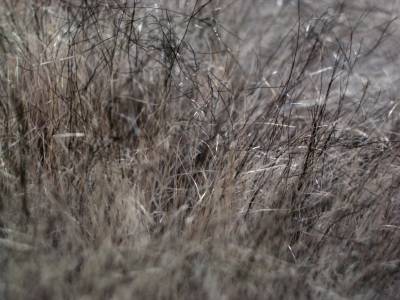 The cause of this alopecic (hair loss) condition in dogs is unclear, but several theories have been proposed. One theory is that the disorder is caused by abnormal adrenal steroidogenesis and is a mild variant of pituitary dependent hyperadrenocorticism. Others have suggested that it may be due to growth hormone deficiency, an adrenal sex hormone imbalance, or excessive production of androgenic steroids by the adrenal glands. Current theories suggest that a local follicular receptor dysregulation may be the underlying disorder. The condition is uncommon in dogs, with the incidence in adult dogs 2-5 years old, especially Chow Chows, Pomeranians, Keeshonds, Samoyeds, Alaskan malamutes, Siberian huskies, and miniature poodles. Gradual loss of primary hairs progresses to complete alopecia of the neck, tail, caudodorsum, perineum, and caudal thighs. The alopecia eventually becomes generalized over the trunk, but the head and front limbs are spared. Hair loss is bilaterally symmetrical, remaining hairs epilate easily, and the alopecic skin may become hyperpigmented, thin, and hypotonic. Mild secondary seborrhea and superficial Pyoderma may occur. No systemic signs of illness are noted.

Alopecia is a follicular dysplasia of color-dilute hairs that is associated with defective hair pigmentation and formation. An autosomal recessive mode of inheritance is suspected (It is believed to be inherited). It is common in color-dilute dogs such as those bred to be blue, or fawn. The disorder is especially common in Dobermans, but also occurs in other breeds, including Yorkshire terriers, miniature pinschers, Great Danes, Whippets, Italian greyhounds, Salukis, Chow Chows, Dachshunds, Silky terriers, Boston terriers, Newfoundlands, Bernese Mountain dogs, Shetland sheep dogs, Schiperkes, Chihuahuas, Poodles, and Irish setters. Affected dogs appear normal at birth but usually begin losing hair over the dorsum of the trunk between 6 months and 2 years of age. Although the hair coat thinning often progresses to partial or complete hair loss, only the color-diluted hairs are lost. The dog’s normal colored markings are not affected. Secondary skin infection is common.

Is a color-linked follicular dysplasia of black hairs that is associated with defective hair pigmentation and formation. It is believed to be inherited, affected puppies appear normal at birth but begin losing hair at around 1 month of age. Only black hairs are affected, with the alopecia progressing until all the black hairs have been lost.

Like the other follicular diseases this is believed to be inherited. This type of follicular dysplasias are poorly understood, it is not development or structural , color linked nor seasonal. It is rare in young adult to middle aged dogs, although it is sporadically reported in many breeds; it’s highest incidence is documented in Irish water spaniels, Portuguese water dogs, Pont-Audemer spaniels, black or red Doberman pinchers, and Weimaraners.

With this condition, a focal area of hair loss occurs at the site where a subcutaneous injection of rabies vaccine (or praziquantel, glucocorticoids, or progestational compounds has been administered) A focal, circumscribed to ovoid area of alopecia develops at the injection site 2-4 months post injection. With canine rabies vaccine, the injection site lesion is characterized by a 2-5cm slowly enlarging, flat to slightly indurated patch of alopecia (hairloss) with variable erythema (red skin) that may become mildly scaly, shiny, and centrally hyperpigmented (black skin).

Is a seasonally recurring follicular dysplasia. The exact cause is unknown, but photoperiod control of melatonin and prolactin secretion may be involved. The onset of alopecia in the Northern hemisphere usually occurs between November and March. Most dogs regrow their hair spontaneously 3 to 8 months later. Episodes of hair loss may occur sporadically only once or twice, or regularly each year. With repeated episodes, a progressive increase in the amount and duration of hair loss may be seen. It is uncommon in dogs, with highest incidence in young adult Boxers, bulldogs, Airdales, and Schnauzers.

Dermatosis Is an endocrinopathy (hormonal disease) associated with the excessive production of sex hormones or precursor sex hormones by the testes (usually caused by testicular tumors). It is common in intact male dogs , with the highest incidence in middle-aged to older dogs. Sex hormone dermatosis manifests as bilaterally symmetrical alopecia of the neck, rump, perineum, flanks, or trunk that may become generalized but spares the head and limbs. Remaining hairs epilate easily. Alopecic skin may become hyperpigmented. Secondary seborrhea, superficial Pyoderma, and yeast dermatitis may be present. The testicles may be normal, asymmetrical, or cryptorchid on palpatioin. The owner may report that the dog is exhibiting abnormal(eg. Attractiveness to other males, standing in a female posture to urinate) or overly aggressive sexual behavior toward other dogs or humans.

Endocrinopahthy is most often associated with primary thyroid dysfunction caused by Lymphocytic thyroditis or idiopathic thyroid atophy. It is common in dogs, with highest incidence in middle-aged to older dogs. Young adult large and giant-breed dogs are also occasionally affected. â